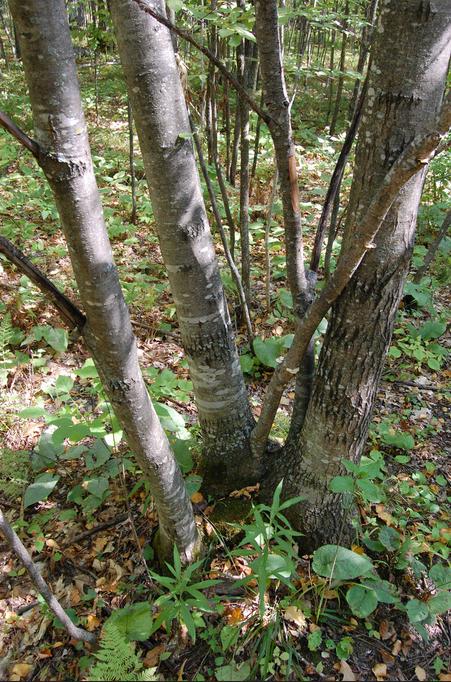 Sprouts from roots or stumps are common form of tree regeneration and need special care to become healthy trees.

I feel we are pretty fortunate to have on our property a number of different trees that can grow well from sprouts.  I say that because getting these trees to come back after harvesting can be easier than from seeds.  Additionally, I like the look and feel sprouted trees give to a stand.

With our sandier soil, we have a lot of red oak, red maple, white birch, and aspen along with the pines and balsam fir.  The first four in that list are prolific stump (root collar) and root sprouters.  Aspen tends to grow better from root sprouts while red oak, red maple and white birch can grow well from seeds or stump sprouts.

Sprouts have an advantage over seedlings by having the support of the larger root system left over from the previous tree.  This reservoir of sugars (for building leaves and branches), and the ability to soak up and transport large quantities of water and nutrients, allows for the production of many vigorous sprouts.  Seedlings can’t match that kind of growth.

Additionally, the established root system can keep producing new sprouts at a rate much higher than seedlings following damage from browse or frost.  Now this may give the impression that reproduction/regeneration from sprouts would be the only option to pursue, but there are some significant downsides to consider.

The first is that sprouts are affected by any root diseases that may have killed off their parent tree or surrounding trees that their roots may have grafted too.  This is especially true for trees infected with oak wilt.  The roots of young seedlings will not be grafted to older trees, and so may avoid this kind of transfer of infection.

The second is that the spatial distribution of sprouts is limited to the maximum extent of the root system (in aspen), but more often to where the stump is (red maple and oak).  A tree’s root system can extend about 2-3 times the width of the crown.  Seeds can be carried long distances by the wind and industrious squirrels.  This obviously has a big impact on the pace in which a species will be distributed throughout your forest.

On the aesthetic side, sprouts add a nice diversity to what can be a monolithic landscape of individual trees.  A pair (I call them twins) of healthy oaks shooting up from the ground at angles from each other forces you to look at your trees in a different way.  I really enjoy the crowd of stems at the base of basswood and red maples.  They remind me how fierce the competition is amongst trees for dominance and the passing on genes to the next generation.

Like any other stand of new trees, the number of sprouts can be too high causing a decline in growth and increased stress.  They will naturally thin themselves over time, but it is best to thin them early on to produce the best trees.  Choosing the right trees to cut and which to leave is not difficult.

For relatively young/small stump sprouts, find and favor the tallest and biggest one whose base is not attached to the old stump and instead comes up from the ground.  Those sprouts growing out of the stump will most likely not develop a sound foundation and may never become a large tree.  Cut the remaining sprouts or leave the two best as long as they are not right next to each other.

For older groups of stump sprouts (where they may be almost 6 inches across), follow the same guidelines as above with one caveat.  If the best tree is growing very close or merging into another tree, then find another tree to leave instead.  It can be hard to thin sprouts that are adjacent to each other without damaging the ones you want to leave.

When I thin stump sprouts, I cut them at an angle so that water runs off rather than pooling.  This will inhibit the remainder of the sprout from rotting and that rot from transferring to the sprout you are favoring.  I also try to do my sprout thinning in the dormant season so as to avoid infecting my trees with diseases like oak wilt.

In a future article I will talk about putting up fencing for deer, which I do a lot of.  In the meantime, see if you can find and improve on the sprouts in your forest.