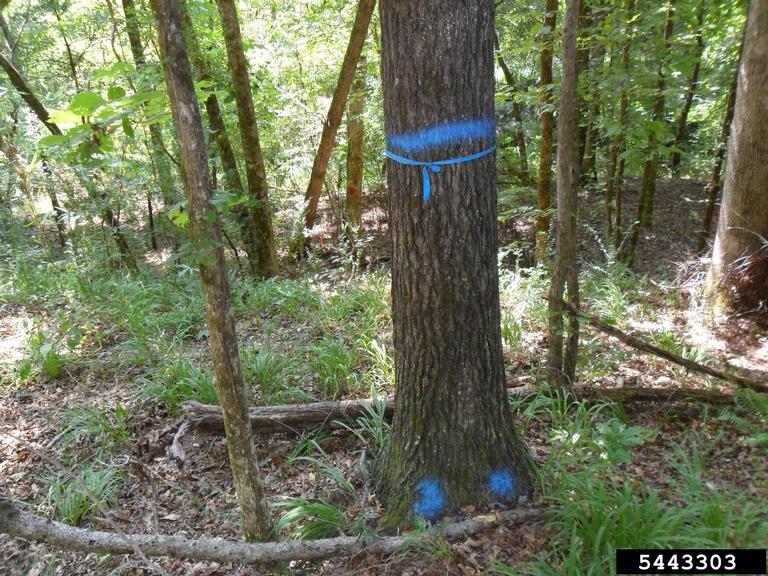 Ever wondered what all the trees painted in the woods was about? Each color has a specific use and needs to be recognized by the landowner, forester and logger.

We are setting up a timber sale in a part of our woodland where we have harvested in the past.   It will have been about 15 years since we last visited this particular stand.  In that time, the trees have grown into some nice number one and veneer quality sawlogs.

We will be harvesting some of these and allowing others to continue to grow.  Selecting the right trees to maintain growth and achieve the other goals will require someone more knowledgeable than us.  Now, we know a lot about growing trees and have some experience harvesting them, but we didn’t want to mess around with a valuable harvest like this. So, we decided that hiring a private consulting forester to do the timber marking and sale administration would yield us the most income.  We have worked with this forester (let’s call him Tom) in the past, and have been happy with the results.

I spent some time in our woods with Tom while he was marking the trees and had good conversations about forestry and owning woods.  I took the opportunity to pick his brain about how he decides which trees for harvest and which to leave along with a number of other topics.

In the past, other landowners have asked me about the paint used to mark trees and what all the different colors mean.  So I asked Tom if there is a standardized color scheme that all foresters utilize.  “Sort of” was his reply.

Tom said that it is common for many foresters that work in the region to utilize certain colors to express specific things.  For example, blue is commonly used to indicate a property boundary, while red is used to indicate the boundary within which the timber harvesting is to take place.  But there is no law that says a private consulting forester has to use a certain color in a specific way.

“In fact,” he continued, “the choice of colors that will be used is something that I work out with the landowner and put into the contract.” Tom went on to say that most landowners are fine with the color scheme he usually uses, but a small few would prefer something different.

Some of the other colors he uses are orange for trees to cut, green for trees to leave, and yellow to indicate which row to harvest in a plantation.  He mentioned that Wisconsin DNR foresters use a slightly different scheme as do foresters working on the National Forests.

Tom finished our little discussion on paints by describing how he paints trees. He usually sprays paint at about breast height (4.5 feet from the ground) and paints trees on more than one side.  That way they will be more visible to loggers working in the cab of a large piece of machinery.

He also says he paints the stump below where the cut is actually to take place of trees that are bigger than about ten inches in diameter.  That way, after the trees have been felled and hauled away, there will still be an indication that those trees were supposed to be cut.

After a while I realized I was paying him to stand and talk with me in our woods, so I let him get on with his work.  I am looking forward to the harvest and seeing how the stand will respond.