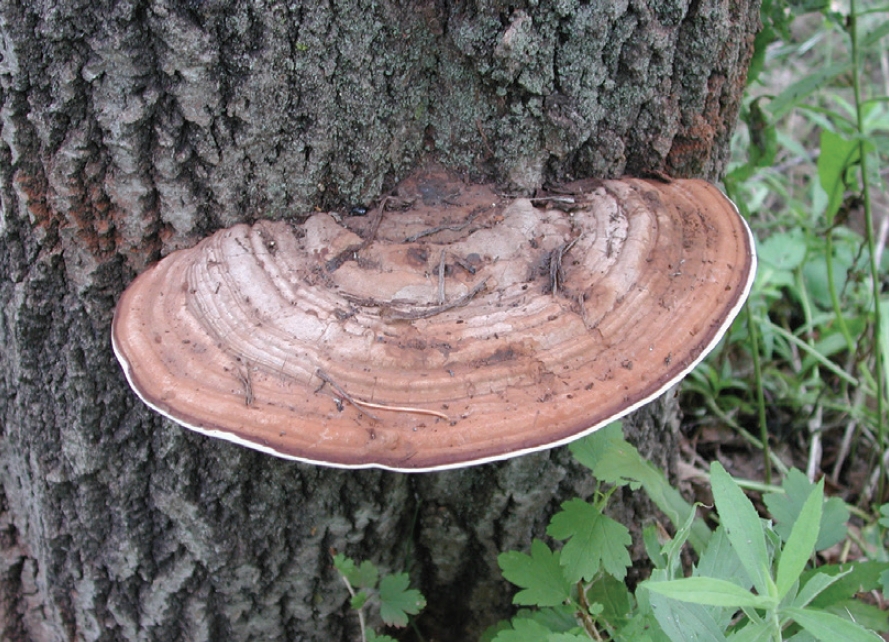 In a previous article, I discussed insects that are attacking our trees and I wanted to follow up with a discussion of the common fungi or mushrooms growing in our woods.  Just like the insects, some of these are very harmful to our trees and the rest aren’t.  What is different from the insects is that some of the fungi can be a benefit to some trees.  Hopefully, after reading this article and viewing some of the information in the links provided, you will be able to figure out which are the good fungi and which you should be worried about.

Let’s start with the beneficial fungi.  These are called mycorrhizal fungi, and they have a symbiotic relationship with trees, which means that they both gain a benefit by working together. Parts of these fungi grow around the roots of trees and make them better at absorbing water and nutrients from the soil.  In return, the trees provide sugars to the fungi.   Some examples of these include the Destroying Angel (found in aspen-birch woodlands), and the Golden Chanterelle and the Slippery Jack Bolete found in upland conifer woodlands.

The next group of fungi are saprophytes and they survive by feeding off of dead or decaying wood. They play an important role in recycling organic matter in woodlands by breaking down deadwood and returning those nutrients to the soil.  There are a lot of fungi in this category and you have probably seen many of these while working in your woodlands.  They can take the form of a conk, like the Artist’s Conk and the True Tinder Conk.  They also come in a wide array of colors and shapes, and here are some examples to give you a flavor for that: Turkey Tail, Bear’s Head Tooth, Cinnabar-red Polypore, Common Split Gill.

The last group of fungi are the ones we worry about the most because they consume the living tissue of trees.  That may kill the tree outright or may lead to a secondary infection that kills the tree. The False Tinder Conk on aspen, the Hoof Conk on oak, and the Honey Mushroom on hardwoods and some conifers are ones to keep an eye out for.  There are a couple of really bad diseases killing trees in the state that are caused by fungi including the Heterobasidion Root Disease (HRD) (formerly known as annosum root rot) and Oak Wilt.  Get to know the signs and symptoms of these last two so you can find it early in your woodlands before it spreads too far. Also, do any branch pruning in the winter when the fungi are not active to reduce the risk of your trees getting infected.

There are a lot of great resources to learn more about fungi including the Mushroom Expert and the Mushroom Observer.  You can also take part in events with other folks interested in mushrooms by being a part of the Wisconsin Mycological Society.