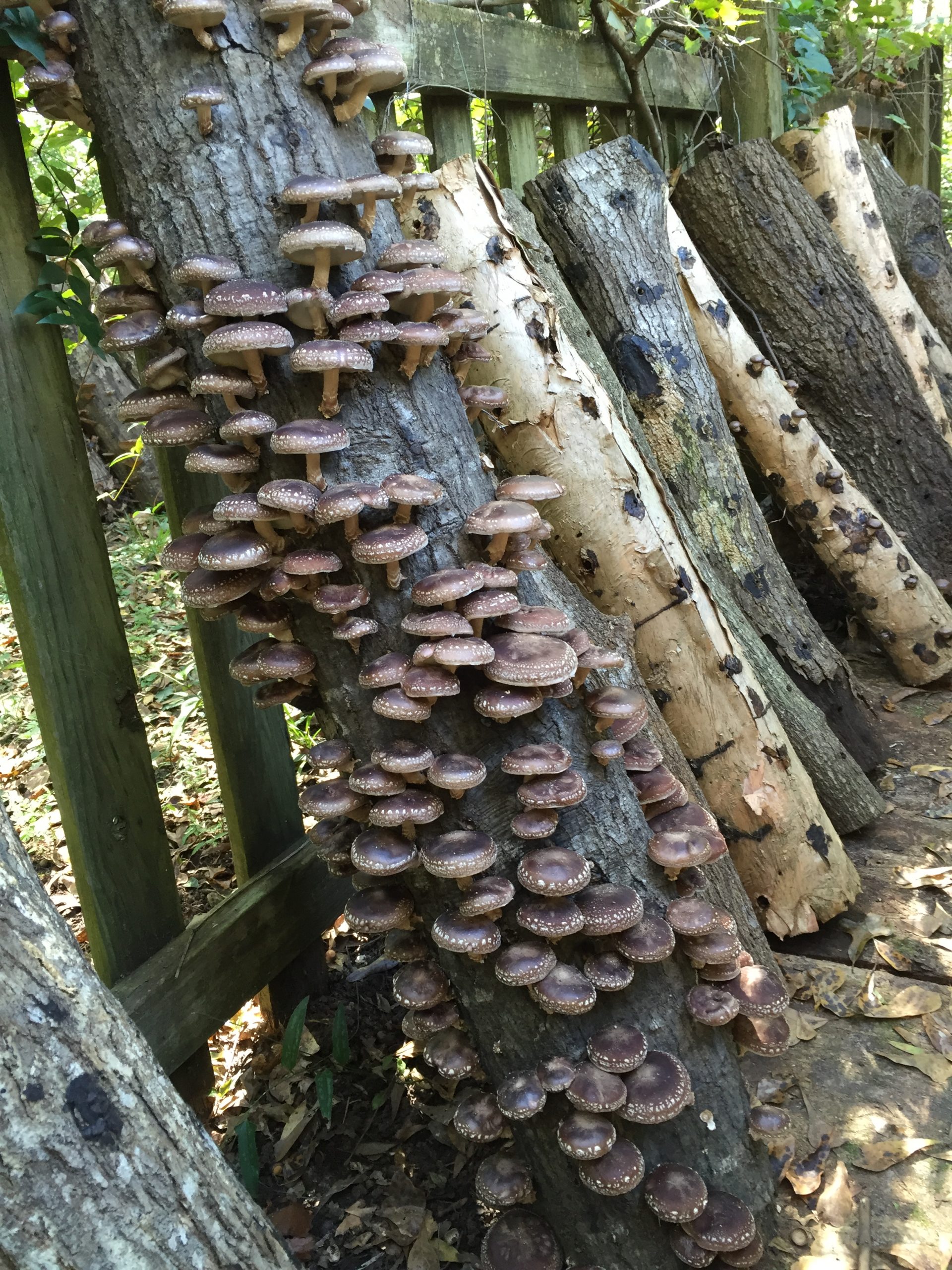 The last agroforestry practice for this series is forest farming, i.e. growing crops in the woods. Forest farming makes use of a multilayered woodland to produce specialty crops that cannot survive in simplified environments like a typical garden or farm field. No matter what your woods currently looks like, forest farming offers a lot of opportunities. Just consider the diversity of ground layer plants, shrubs and understory trees, vines, canopy trees, and fungi that already call your woods home.

A Walk in the Woods

I’ll never forget the first time I toured a forest farm. I was a graduate student and a horticulture professor named Ken Mudge gave me a ride in his old pick-up to tour his research site. The site was called the MacDaniels Nut Grove, but at first glance it looked like an ordinary farm woodlot. Ken had stumbled across the nut grove, on the back corner of a campus research farm, a couple years earlier and noticed some interesting peculiarities in the woods. 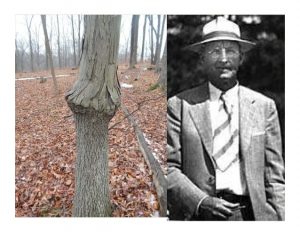 The first thing he pointed out on my tour was the bulging trunks on many of the old hickory trees. The bulges were graft unions from the 1920’s when Professor MacDaniels, the site’s namesake, had grafted hickory cuttings to rootstock from hardy local saplings. Ken told me that MacDaniels would visit county fairs across the eastern US where farmers would showcase their best hickory nuts. He would take cuttings from the blue-ribbon trees back to Ithaca to add to his collection. 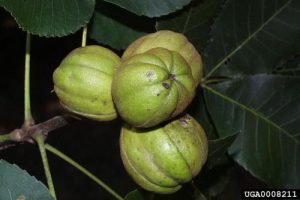 Hickory nuts are both nutritious and delicious and were historically a vitally important semi-wild crop. Over the last century, production fell out of favor because most hickories produce small nuts that take a lot of work to get from tree to table. However, this grove was filled champion trees that rained nuts each fall which were 2-3 times larger than the average.

As my tour continued, Ken kept pointing out specially selected trees species which were all cultivated for food production. All the ‘crop’ trees were happily growing in their preferred location in the woods, not planted together in recognizable rows. There were several varieties of hickories, black walnuts, chestnuts, persimmons, paw-paws, and that was just the trees.

Due to the woodlot’s composition, Ken did not harvest maple syrup, the most widespread and well-known forest farm product in North America. However, the nut grove produced specialty syrups made from walnut sap, elderberry fruit, and hickory bark. Ken was also excited to talk about collecting birch sap to be consumed as a beverage. Although not common in the US, many cultures around the world drink tree sap for the lightly sweet flavor and potential health benefits. 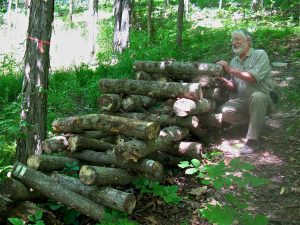 We continued down a loop trail to find numerous piles of logs that looked like mini cabins, and stock tanks with logs floating in the water. They were shitake mushroom logs at different stages of production. By soaking them in water, the inoculated shitake logs were forced to fruit on schedule. Ken explained that the controlled fruiting provided a continuous harvest throughout the growing season. 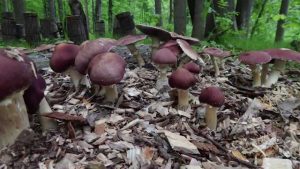 Beyond the shitake logs, we came to mulch beds inoculated with ‘wine cap’ mushrooms and standing logs with horizontal cuts called ‘totem stacks.’ Wine caps, or stropharia mushrooms, love wood mulch and will continue to spread and fruit for years if fed more mulch (great use of wood chips from woods work). The totem stacks were producing lion’s mane mushrooms, which has anti-inflammatory and antioxidant properties, and is said to support immune and nervous system health. All three mushroom species were cultivated in an area the size of a small garden. However, none would grow without the moisture and temperature control provided by the forest canopy and their wood substrate that was collected in those same woods. 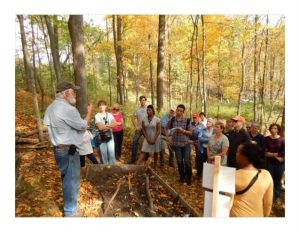 On our way back up to the truck, Ken pointed out several rows of 2×12 boards embedded into the hillside. They formed planting beds for shade-tolerant herbaceous species. The terraced beds reduced erosion on the slopes and improved water infiltration. Also shaded by the canopy, this plant nursery helped retain moisture to withstand summer droughts.  The cultivated beds contained ramps (wild leeks), ostrich ferns for fiddle heads, ornamental plants like hostas and maiden hair ferns, and medicinal plants like golden seal and american ginseng. Although ginseng can be grown in fields with shade cloth, their value is greatly increased when grown in a forest setting.

When I finally understood everything I was seeing in the MacDaniels Nut Grove, the productive potential of a well-managed forest farm was almost unbelievable. And Ken’s enthusiasm for the site was contagious. The beauty of farming the woods is the multilayered production that stacks species together and staggers production over all four seasons. Different crops in different places occupying different niches to increase and diversify production. However, due to the complexity and lack of mechanization, most folks are not getting rich forest farming. It’s a lot of work to bring the crops to market, and the market must be there in the first place. Nevertheless, most forest farmers will say the lifestyle of working in the woods and relationships they develop with their property are priceless. Consider picking a crop or two to try in your woods, because forest farming is truly an agroforestry practice for any woodland property.