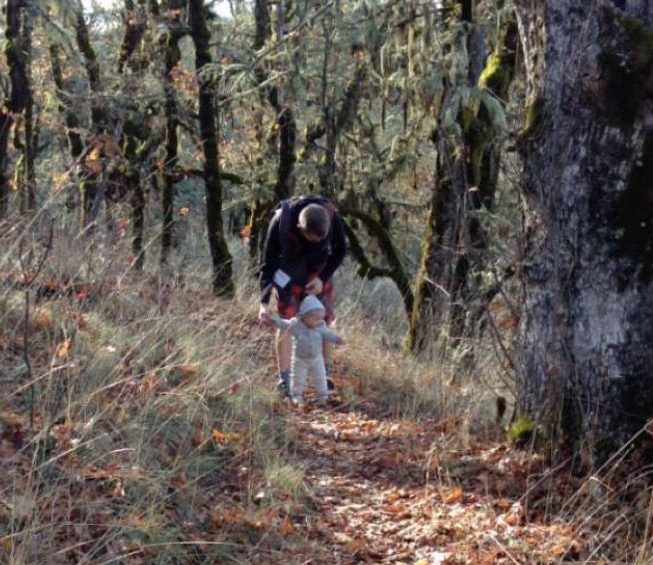 One of the joys of walking in the woods with a toddler is moving slowly enough to appreciate the little things. I like to walk with my 2-year-old daughter at a State Natural Area (SNA) near our home. She’s got a different perspective from me, due both to her size and her relationship with the woods. She greets nature with a curiosity most of us lost long ago.

Experiencing nature this way adds depth and texture to the environment by revealing the characters that shape it. My daughter and I take time getting to know the individuals bringing life to our local woodland. With a little consideration, it seems few species are as overlooked and under-appreciated as mosses.

Mosses are classified as bryophytes. However, they’re often lumped with liverworts and club mosses and simply called primitive plants. These species are different from our common sense idea of a plant. They lack more recently evolved structures like roots, seeds, bark or flowers.  In fact, the fossil record shows that some moss species have existed in their current form for over a hundred million years.

The ancestors of mosses were likely the first plants to move from water to land.  These ancient colonizers grew where no plant had before. Their lives helped break down rock and build the foundations of life on land – soil and atmospheric oxygen.

Since the beginning, mosses have made their living primarily where other plants could not.  In a lush woodland environment like my local SNA, we typically find mosses in damp, dark pockets on the forest floor, clinging to tree bark, or loosely set on a glacial erratic. Mosses thrive in these places because modern plants cannot. In the life strategy of a moss, competition is for losers.

It’s a mosses relationship with water that makes them truly unique among the land-plants.  Unlike the pollination that fertilizes most modern plants, moss reproduction requires water as a medium. The male reproductive cells of mosses have tails and swim through water droplets to find their female counterparts.

True mosses also lack roots or vascular tissue to move water from where it is to where the plant needs it. For instance, a tree sucks water from the roots and moves it through the trunk to mix with sunlight and carbon dioxide in the leaves. Without any of these structures to control water availability, every cell in a moss plant needs direct contact with water to take in carbon dioxide and make sugar.

Mosses accomplish this with intricate structure and tiny stature. Their particular body forms allow them to capture and hold water on their surfaces. Groups of mosses often grow in dense mats that act like sponges, attracting and holding water as a community. These sponges are also key habitats for other wildlife, including hemlock saplings that struggle to survive to maturity without them. While entire orders of land plants have evolved and gone extinct, the primitive forms and habits of mosses have allowed them to endure through geologic time scales.

Mosses are not a commonly considered ‘good from the woods.’ However, they can be collected from the wild and grown in garden settings or terrariums. You can also find some amazing artwork made entirely of moss (see google). A notable economic exception is the widespread commercial use of Sphagnum moss as fuel, packing material and soil amendment.

Due to their small size, identifying moss species can be tricky. It’s further complicated by the fact that many species commonly called moss, like Spanish moss and reindeer moss are actually lichen. Therefore, I recommend getting familiar with the other types of primitive plants as well. But just like learning anything, it’s smart to keep it simple as you begin.

Start by identifying the most common primitive plant species in the areas where you spend the most time. Once you know them well, it’s easier to distinguish others based on how they are different. Here are a couple common plants to start with that can be found in many Wisconsin woodlands: 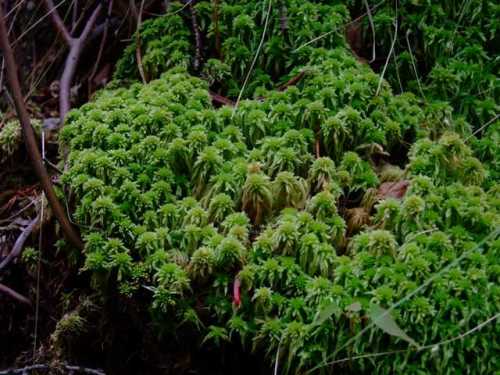 Sphagnum spp.; peat moss. Common, widespread moss of wet habitats where it often forms large, deep colonies or floating mats.  Peat moss is the fundamental species of bogs, acidifying the habitat and forming much of the substrate in which the other plants grow. More than 30 species occur in Wisconsin. 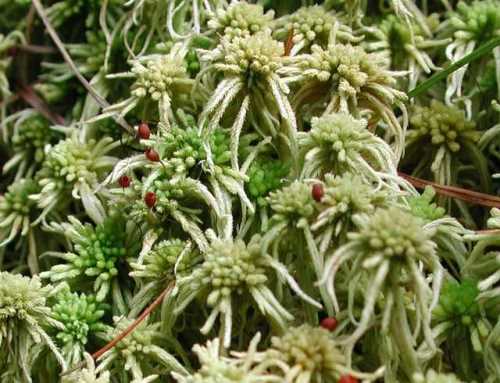 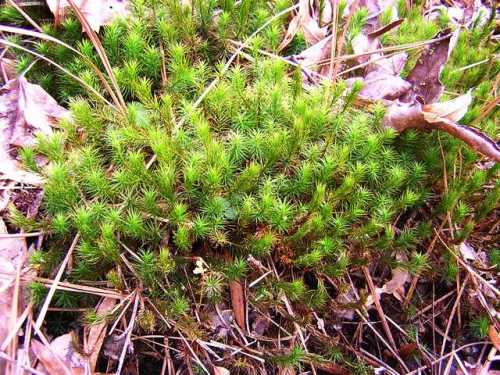 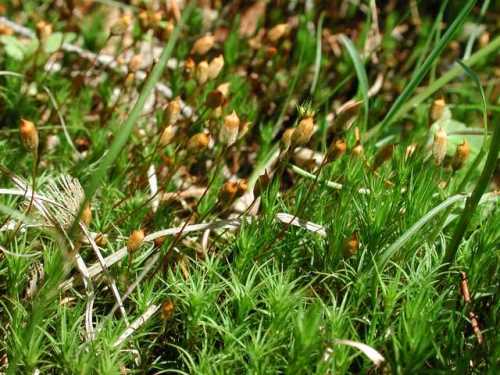 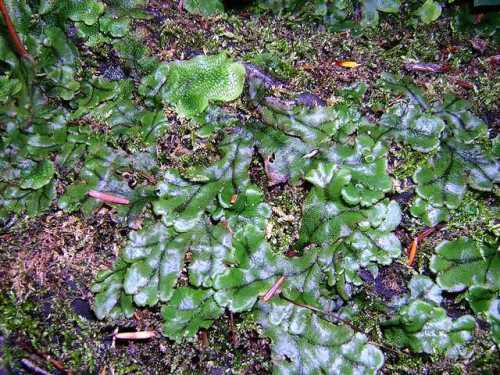 Marchantia polymorpha; common liverwort (not a moss) These plants lack a stem or leaves.  They consist of a flattened branching thallus only a few cells thick anchored by rhizoids growing from the lower surface.  They are fairly widespread and most commonly found along moist shady stream banks. 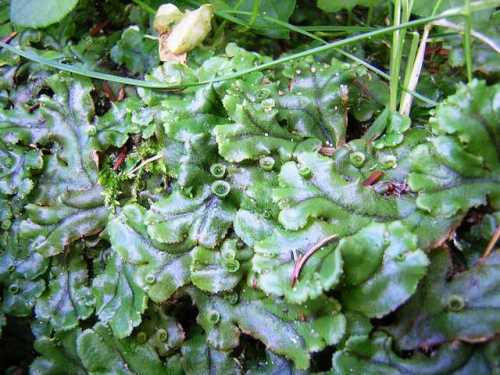 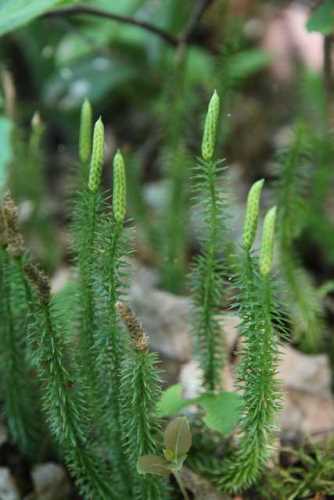 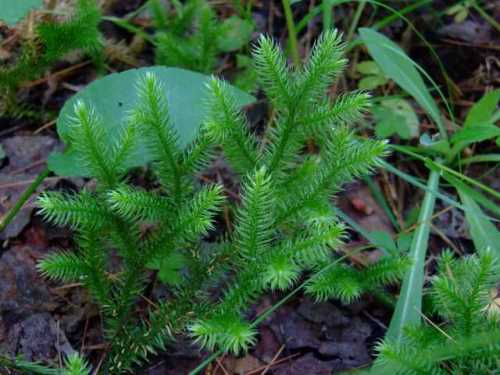 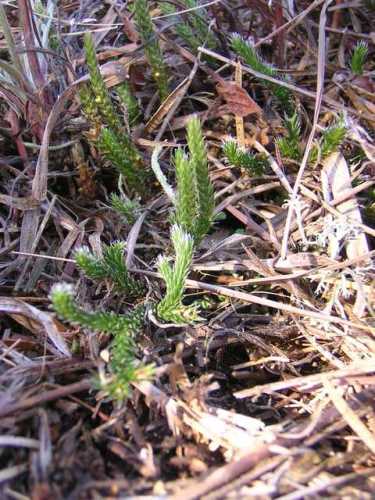 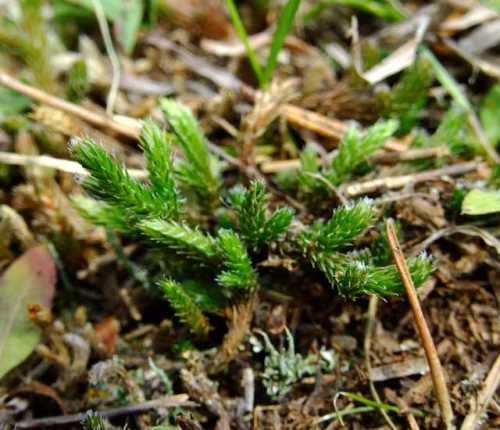 If you want more reading, I recommend Robin Wall Kimmerer’s book ‘Gathering Moss’ as perhaps the most insightful consideration of mosses that has ever been written. She writes just as eloquently about the science as she does her relationships with the living world. And don’t delay heading out to your local woodland to make some relationships of your own.

On your next walk in the woods be sure to bring a curious mind, and maybe some children too. Leave expectations of miles covered at home. You’ve got to slow down and get low down to connect with the lives that make our woods. Mosses live on a different scale from people. It takes curiosity and attention to notice the differences, but in nature the differences matter. 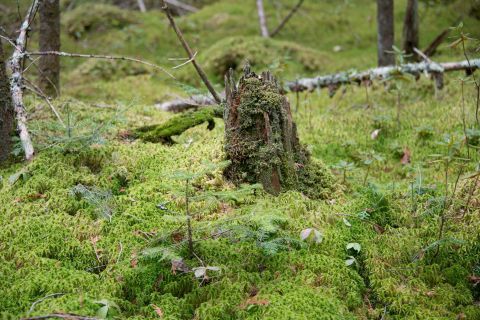