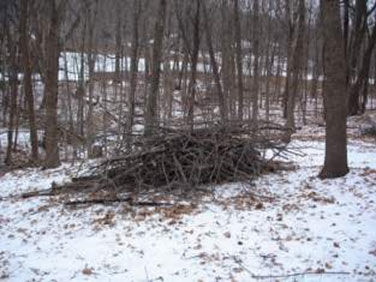 Use the small branches and tops for wildlife habitat rather than firewood.

It was many moons ago, that an argument took place in the woodlot that changed forever how we utilize the wood from the trees we fell. I was in my early years of tree felling and processing, and so was still taking advice from the older and wiser family members. Their philosophy at the time was that anything bigger than an inch in diameter was cut up for the wood stove. But one auspicious day that all changed.

You see it was on that day that the women of the family volunteered to help with the woods work, and they did more than their fair share. However, it was following the felling of a tree and the subsequent processing that the ruckus took place. Fortunately for me it was my assistant, who shall remain nameless, that got caught in the crossfire of the women folk. You see they took umbrage to his cutting up of the top of the tree into stove-length pieces. It seems they were of the philosophy that piling the slash (i.e. tops and branches) to create wildlife habitat would make better use of it than as kindling. A bit of an argument ensued, from which an agreement was reached regarding slash. Namely, we would stop making kindling out of it and instead make brush piles and be happy about it.

Before that day, we had been spreading the fine branches we didn’t collect around the forest floor. By doing this, the decomposing branches returned the nutrients to the soil evenly throughout the forest. Looking back this was indeed a fine tactic to take, but didn’t have the kinds of impacts we were looking for in the way of attracting wildlife. One of the objectives for the family forest had been and still is to attract a wide array of wildlife to the property. By utilizing every last scrap and leaving out a critical bit of habitat (i.e. brush piles), we were unknowingly placing a limit on which wildlife might visit.

At first we struggled with leaving good wood behind. Slowly we began to embrace the idea and created some high end hooches for the critters. We found that the better we built them, the longer they would last. So, what started as an argument regarding how to use slash, turned into a challenge to build more complex and attractive condos for our furry inhabitants.

There are some simple guidelines for building brush piles for wildlife. They should be about six to eight feet wide and high, and separated by 100 to 150 feet. Two to four per acre, and away from anything you don’t want these small critters to be getting into like your vegetable garden. The key to making these attractive to wildlife is to create space at the bottom for small animals to crawl into and escape from predators and the elements.

To do that you need to build a stout foundation. We use sticks/branches that are about four feet long and four to six inches in diameter. Lay them out on the ground parallel to each other and with some space between them. Then lay another layer of sticks/branches of the same size on top of those but perpendicular to the first row. A base like that will last a lot longer than just using small branches and will maintain spaces for critters to hide in. Finish the pile by placing layers of smaller branches on top that intertwine with each other to about six feet in height.

You can easily end up with more slash than you know what to do with, and chipping is a great way to solve that problem. Many folks will rent or buy a small chipper to process the excess slash into something they can use on their trails or as mulch. Putting chips on your trails and roads is a great way to protect the surface from wear and erosion.

The compromise we agreed to with the women in the family has dramatically increased the numbers and varieties of wildlife that we have been seeing in our woods. And it has given us something else to compete at, namely who can build the best critter condo.

You can learn more about building brush piles by reading “Rabbitat: Brush piles for wildlife” .