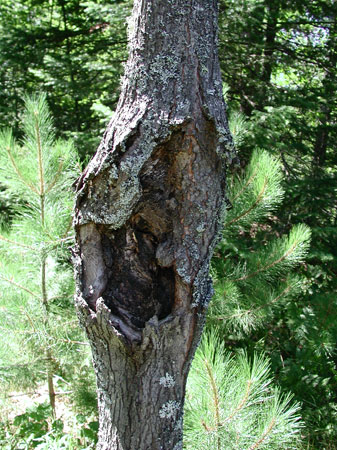 Learn how fungi and other diseases can kill your trees.

In a previous article, I talked about how insects kill trees. Here I will cover how different fungi can kill trees.

Let me start by saying that not all fungal infections are alike. Some can cause just minor damage to a tree, while others can kill a tree in a matter of days. It should be noted that some fungi play a beneficial role in our woods by breaking down dead trees into basic parts, while others have a cooperative relationship with trees where both benefit.

Minor fungal infections can be of the leaves and flowers like Anthracnose. You have probably seen spots associated with this fungus on maple and oak leaves in the lower part of the canopy where the humidity is higher Some of these infected leaves may die, but it usually isn’t enough to kill a tree.

Black Knot is another one of these less than deadly fungi. Like Anthracnose, it is fairly common, so you have probably seen it in your woods or yard. It forms black, nasty looking galls on twigs and branches, and may cause the top of the branch to break off if the infection gets bad enough. However, trees can live for many years with hundreds of these cankers on their branches or main stem.

There are also fungi that cause large cankers on trees, like Nectria, or Eutypella. These cankers can grow for many years on the tree and never girdle the tree, although they may cause it to be a bit disfigured, and in some cases that canker area on the tree will be a weak spot where the tree may break in a strong wind.

The big hitters in the fungus world are those that infect the vascular system of the tree. The vascular system is made up of the tissues that transport water and nutrients from the roots and leaves to the rest of the tree. If this transport is disrupted, then the tree will suffer from reduced growth, may be susceptible to other infections or insect attacks, and may die.

You have already heard of some of these, like Oak Wilt, Dutch Elm Disease, and Chestnut Blight. The last two have all but wiped out our native populations of American Elm and Chestnut. Oak Wilt could have the same effect on many of our Oak species if it goes unchecked.

There are others fungal diseases out there that may be less familiar to you. These include Armillaria and Phytophthora Root Rots, Annosum, and Verticillium Wilt.

They all work in a similar fashion: the spores of these fungi land on and start to grow on some part of the tree; the cells are slowly killed and decayed by the fungus; the fungal growth spreads to the vascular system; the system becomes “clogged” due to dead cells and can no longer transport sugar and water.

If enough of the vascular system gets clogged up, then the tree will literally be choked to death. Sometimes trees can contain the infection to only part of their system and so can continue to grow but at a slower pace.

It is easy to feel helpless when you find out that your trees are infected with one of the many fungi we have here. There are, however, measures that you can take to reduce the spread and possibly save some trees.

If you have a leaf disease problem, you can rake up and dispose of the leaves when they drop; this will reduce the number of spores available for re-infection. If you have branch galls, like black knot, you can prune the galls out of the tree and dispose of them, or you can simply let them grow. If you have a root rot, a stem decay, or a vascular disease, the simplest thing is to cut out those infected trees, this is sometimes called a sanitation harvest.

When you are dealing with infected trees that are extremely valuable to you (for whatever reason), you may be able to have them treated with a fungicide, depending on the disease. Some of these can be pretty effective at eliminating or slowing the growth of the fungus. But it most likely won’t be cheap and may require multiple applications over many years.

So, it is a good idea to keep an eye out for trees that seem sickly or dying, and get them checked out to see what is going on. If you can catch an infection early on before it gets too widespread, you may have a good chance to spare many of your trees.