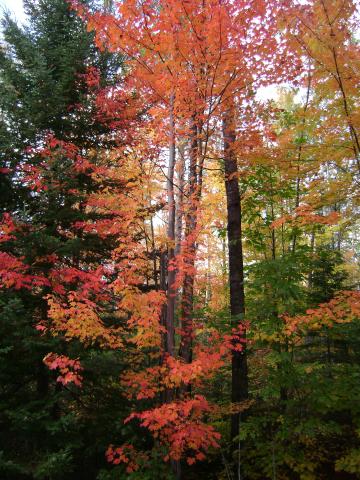 The practical uses for a woodlot don’t have to conflict with the aesthetic values a forest provides.

I have some really good memories working in the woods with my wife’s grandfather.  Arnold was a retired farmer who was still gardening and harvesting trees for firewood when I first met him.  For the next twenty years, he and I would spend a lot of time together working in the woods, comparing notes on gardening, and discussing the movement of deer and turkeys on the farm.

As most landowners who heat with wood, he had a very pragmatic view of his woodlot. He would look at trees and see piles of firewood or acorns for the squirrels and turkeys or housing for the woodpeckers.  But that wasn’t the only thing he saw.

We often marveled together at how the fall colors could be so different from one year to the next.  He liked how the pockets of brush coming in under the mature trees added to the visual variety of the stand.  And he enjoyed the diversity that woodlots added to the mostly agricultural landscape in the Tomah area.

We worked to increase these aspects of his woods in conjunction with our more practical work.  Most of the time, the things we were doing to achieve other goals he had for his woodlot (e.g. more firewood, more wildlife, etc) also fulfilled his goals for aesthetics.

For example, creating openings for wildlife encouraged the growth of brush that he liked.  We tended to encourage the growth of the best species for firewood on the property (oak and maple) and those happened to be the best producers of colors in the fall.

Sometimes his goals would conflict, and he would have to make a tough decision.  For instance, a large, open-grown oak was starting to show its age and we needed to decide upon its fate before it began to rot.  For decades it had been a source of food and housing for wildlife.  It also had been a place for us to rest under at mid-day, and we always looked for it on our rides to and from the woods.

Practicality won out and it ended up on the wood pile.  We understood that there is a cycle to these things and have found new trees to rest under and enjoy.  We haven’t forgotten that tree though and often return to that spot to see how the stump has changed and if any volunteers have been coming in to take its place.

I hope you get to have experiences like we have and appreciate all that you can get from your woods.  I have found the best way to do that is to slow down and take some time to really soak in all sights, sounds and smells.  It is time you will never regret taking.